Reconstruction has both literal and metaphorical meanings for Rheims. At its heart, stands the cathedral, for centuries the centre of historical events with consequences reaching far beyond the limits of the city. The construction of this monument, emblematic of Rheims’s cityscape, testifies to the dynamism of Gothic architecture in the Middle Ages; however, through time it has been the object of numerous destructions and reconstructions due to fires, revolutions and wars… Parts of the cathedral bear the stamp of Viollet-le–Duc’s controversial restoration, and still show the scars left by the 288 shells that hit it, in a city that was almost entirely destroyed during World War I. 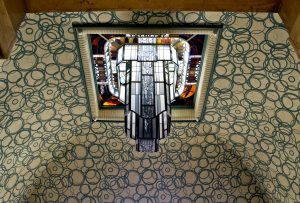 In the 1920s, the cathedral also became the subject of a heated controversy which reappeared throughout many other regions of France after World War II: should reconstruction aim at the exact duplication of what was destroyed, or should it be an opportunity to experiment with new architecture and city-planning? The reconstruction of Rheims was sponsored by American benefactors, as evidenced by the ‘Rue Rockefeller’, and especially by the beautiful Carnegie Library, one of the finest examples of Art Déco architecture in Rheims. There is also the Boulingrin Market created by Emile Maigrot, a part of the reconstruction project engineered by American architect George Burdett Ford.

The theme of reconstruction can therefore be envisaged as a reflexion on the process of reconstructing cities, but also nations, states, and empires in the wake of conflicts or catastrophes: civil wars, wars of independence, territorial conflicts, revolutions, uprisings, natural disasters, whether those events are historical or fictional.

The year 2017 is also the 500th anniversary of Luther’s 95 theses, issued in October 1517, which led to destructions and reconstructions within the Church. Following the creation of the Church of England, English Catholics attempted to re-establish the link with Rome. There are traces of their presence in Rheims, when, under the guidance of Cardinal William Allen, they produced the famous Douay-Rheims translation of the Bible. Richard Baines, the spy who accused Christopher Marlowe, was among them.

Papers based on postcolonial studies/ theory are especially welcome as a means to reflect on the process of reconstruction in the case of newly independent nations, through state institutions and structures, but also through culture, art, literature and language.

A possible field of investigation could be the construction or reconstruction of a national/local/regional heritage, whether in literature, art, music or architecture. The subject of the retrospective (re)construction of a literary or artistic canon can be explored : Edmund Spenser striving to recreate a pseudo-archaic language ; the Pre-Raphaelites imitating fifteenth-century painting ; the members of the 19th century Irish Celtic Revival aiming at reconstructing Gaelic language and literature. To what extent has art or literary history retrospectively (re)constructed movements, schools, and genres, such as classicism, realism, modernism, expressionism, impressionism, postmodernism…?

Specialists of literature or art historians can explore the connection that is  (re)constructed between image and text, or between text and film in the case of film adaptation, and various other intermodal forms of expression.

Historians in particular are invited to investigate the idea of (re)constructing the past, for example in reference to the debate between those who consider history as a text similar to any other, and those for whom  archives validate the historian’s work.

Regarding nations that were once colonised, one could reflect upon the re-writing of history, as exemplified by the ‘revisionist’ school of history in Ireland.

The debate also includes literature when writers seek to recreate reality, for instance through the realist novel, the historical novel, ‘faction’, autobiography and biography…, but also when researchers try to (re)construct the various stages of the creation of a work of art. The same is true of the reconstruction of theatre stagings, and of literary history in general. In Britain, the reconstruction of the Globe Theatre can be seen as a mark of the prevailing obsession for authentic reconstitution.  The issue of (re)construction leads to the notion of authenticity and the nostalgia for the past, which lies at the heart of postmodernism.

In the area of language and linguistics, the notion of (re)construction firstly addresses the primary issue of the construction of the English language  and in particular that of the establishment of a common norm and the survival  of that norm despite external influences – particularly foreign borrowings- and despite evolutions in that usage through time, as new generations are often accused of ‘destroying’ the proper usage of a language.

The notion of (re)construction can also be understood from the perspective of linguistic models : how to build an abstract pattern, a grammar or a phonology able to account for the diversity of forms and usages proper to a natural language ? How to re-assess and renew existing models?

The conference topic also invites specialists to focus specifically on the field of construction grammars, which reject the idea of a natural universal grammar and implicitly deconstruct the generative model which prevailed until recently among American linguists in particular.

Specialists of translation studies are invited to consider their practice as a form of re-creation, revised translations as re-writings or re-adaptations: why is it necessary to re-translate texts ? Is translation the (re)construction of a text in another language ?

On a more general level, the notion of (re)construction may be seen as essential to a contemporary debate regarding the concept of deconstruction invented by Jacques Derrida, which some thinkers tend to regard as synonymous with general relativism and a threat to all forms of authority. Is it necessary today to (re)construct a system of interpretation of texts which would leave less room to ‘differance’ and ‘decentering’?

With regard to didactics, within both the field of psycholinguistics and that of foreign language acquisition, the notion invites exploration of the cognitive processes of deconstruction-reconstruction involved in the building of meaning, as well as an analysis of the procedures for English language learning that teachers and researchers implement.